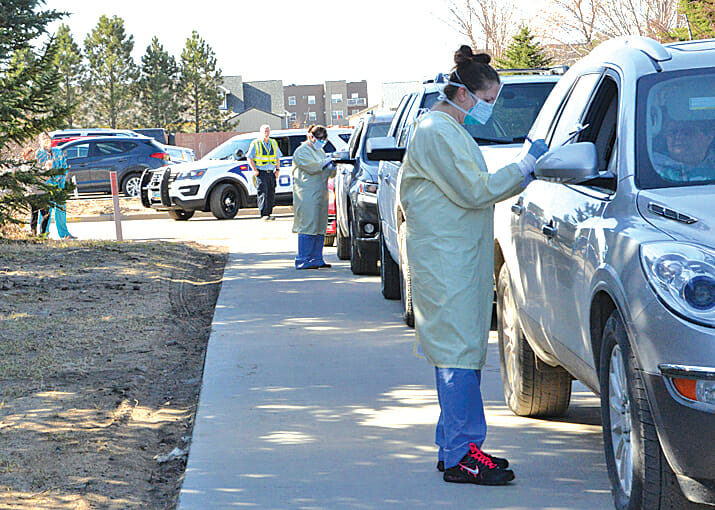 Mountrail County Health Center in Stanley hosted a Drive Through COVID-19 testing event on Friday, Apr. 24. Testing started at 10:00 a.m. and ran through 2:00 p.m. although the lineup of vehicles of those waiting to be tested started more than an hour before.

Testing was organized through staging using the Stanley High School parking lot. Those looking to be tested were asked to report to the High School where they were assigned a number to their car. Mountrail County Sheriff Corey Bristol and several of the department officers, Mountrail County Emergency Manager Warren Bogert along with the Highway Patrol were at the school to coordinate that portion of the event.

When told by Health Center staff, they would then send a set number of vehicles down 8th Avenue towards the hospital. Along the way, intersections were being controlled by members of the Stanley Public Works and Stanley Police Department to assure smooth movement of not only those who were waiting to be tested, but also those cars that were just trying to go from one area of the city to another.

At the Health Center, they were met by staff with the information forms prior to testing. They then moved along the driveway area on the east side of the complex for testing. Tests were administered by staff and then brought back into the “command center” where they were documented and packaged for transport to the State Lab for testing.

The Health Center was grateful to all that helped make the testing a success, saying they could not have successfully done this test without coordination and manpower from the Stanley Police Department, Mountrail County Sheriff’s office, Stanley Public Works, and the Highway Patrol. They kept everything moving as smoothly as possible, without clogging up city streets with traffic, and that was no small feat. People participating were in awe of the teamwork as they drove from the staging area and down 8th Avenue to MCHC.

Additional thanks went to Marilyn Gaebe, who provided a delicious lunch for staff and kept them energized for the entire day. They appreciated Estvold Oilfield Services, specifically Jake and Kelsey, for allowing them to use their coolers to safely transport tests from Stanley to Bismarck testing labs and the “best COVID-19 courier in the state” Rodney Essler.

They also expressed their thanks to the community saying, “We would not try to offer these testing services if we did not think that people would show up to be tested, and our community SHOWED UP! It was a steady stream of cars the entire four hours.”

Last but not least, they expressed a personal thank you to the staff of the Mountrail County Health Center. From traffic control, to gathering information from each test subject, to registering each test subject, and properly marking each test to the Providers performing the swabs, and then our lab processing each test from 10:00 a.m. to 7:30 p.m. and to everyone inside the building allowing business to proceed as usual. This was pointed out as teamwork at its ultimate finest.

In the span of a little over 4 hours, the Mountrail County Health Center staff were able to test 189 vehicles, totaling 357 tests that included residents from throughout the county and a few out of county residents. “Thank you to everyone who came to get tested so we can gather more data about how this virus is impacting our community and to start working on getting North Dakota open again,” they said.

The drive through testing helped support Governor Doug Burgum’s goal of increasing testing to start the work on smartly reopening the state.

This testing clinic was a group effort between administration and providers.

Additionally, per direction of the state, the facility is also testing all of their residents and employees starting last week and continuing on Monday.

As of Monday morning, tests completed in Mountrail County had increased from 524 on Friday to 892 on Monday. One new positive was recorded on Monday, up from the cumulative 33 since the first tests administered in the county. That new positive is part of the testing done on Friday and is a case from New Town. Of the 892 tests recorded in the county thus far, 858 have returned negative. Not all of Friday’s test results were included in Monday’s numbers.

This article has been republished by the gracious consent of the Mountrail County Promoter.