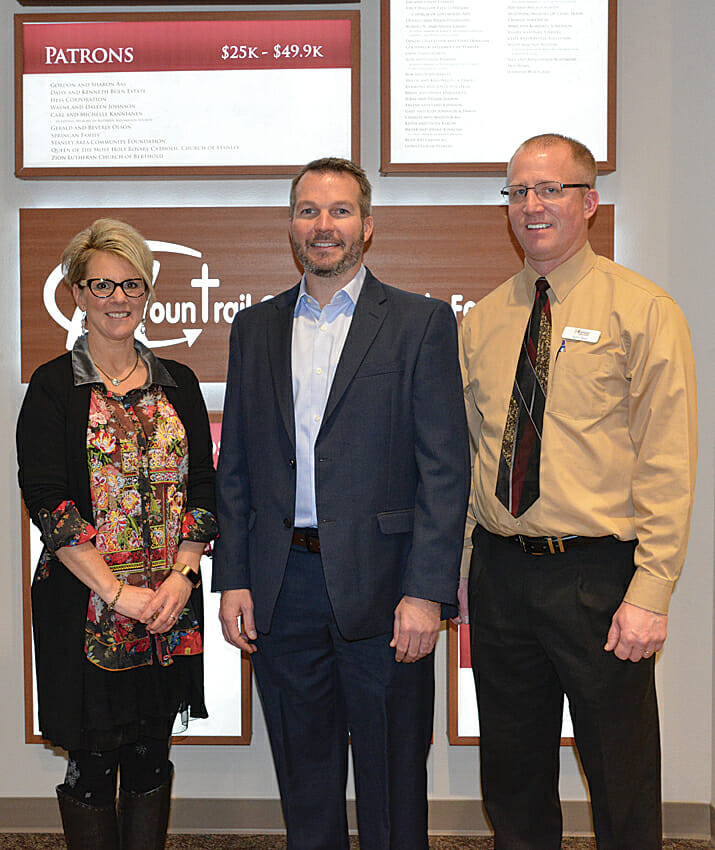 This article is republished with the gracious consent of the Mountrail County Promoter.

The selection process began when HR Director Janet Chastain reached out to the Long-Term Care Association. The association maintains a list of administrator’s potentially available to serve as interim administrators. With eight names on the list, she reached out to the boards and Bucher, asking if they could meet. At that meeting held on November 7, the boards felt that Bucher was an impressive candidate both in his response, resume and the interview process.

Bucher is the current CEO/Long-Term Care Administrator for Towner County Medical Center and Towner County Living Center in Cando. He is the Board Chair of the North Dakota Hospital Association, a member of the Heartview Foundation Board of Directors and on the CAH Quality Executive Committee Board.

Bucher says, “This is not a unique situation, having a CEO or Administrator resign. It is important to come together and help each other out, especially as part of small town rural healthcare.” The same situation occurred in Cando with them needing an interim administrator for eight months. The board there appreciated the assistance and said that they would be willing to offer the same assistance if the need arose.

Bucher holds a Masters in Business Administration with Specialization in Healthcare as well as a Masters of Science in Nursing, FNP-BC. He has a current practice as a Family Nurse Practitioner, family practice, emergency department and hospital inpatient at Towner County Medical Center in Cando and Presentation Medical Center in Rolla. His past work experience includes clinical nursing instructor for public health nursing at UND; and a registered nurse, patient care coordinator/supervisor at Altru Health System in Grand Forks. His honors include being named the ND Emerging Rural Health Leader the same year Dr. Mark Longmuir was named the Rural Health Care Professional.

Bucher will be splitting his time between the facilities, saying that his time in Stanley will likely be a few days every few weeks. However, when he is not on site, he will still be available 24/7 by phone or email.

This situation will put responsibility on staff in both facilities, but he says that he knows that the staff is in place in both to assure that they will run well. The managers, supervisors and all staff will have to buy in to the arrangement. “I wouldn’t do it if I didn’t think that both facilities were able to do that,” he says.

MCHC board president Heath Hetzel says, “We are very thankful for the years of service that Rocky gave us.  He navigated us through some tough situations over the past 3 years.  We are now moving to a new chapter with Rocky’s retirement.  We are looking forward to having Ben as our interim administrator/CEO and the wealth of knowledge and experience he will bring to our facility.  We are also excited for the opportunity to have local interest in becoming the next CEO/Administrator for Mountrail County Health Center.  I have worked with Steph over the past 5 years while she has been the Foundation Director and have been impressed with how she conducts business and the energy that she brings to her job.”

For Everett, the work will begin right away as she will need 480 hours of training, and then complete all national and state testing. Dan Kelly of Watford City will oversee her hours as preceptor. He will oversee her training in Stanley’s facility and Cando’s with Bucher when he is there, along with his facility in Watford.

The training and testing are necessary for administrator of a nursing home. It breaks it down all areas of running the facility. The goal is that by May or June she will have the working knowledge necessary to begin assuming leadership roles at MCMC. By training with both Bucher and Kelly she believes she will have the necessary understanding to run the critical access hospital.

Everett says, “I want to thank the board members of the: Mountrail Bethel Home, Mountrail County Medical Center and Mountrail County Health Foundation/SCH for having the confidence in me to take on the position of CEO/Administrator. In the five plus years I have been the Foundation Director, we have seen tremendous growth. As I look ahead, I see awesome opportunity, and a great team that I am excited to lead to higher levels of growth. I wholeheartedly believe in our community and working together to ensure that Mountrail County and the City of Stanley has a thriving Health Center that will take care of the residents of our community for over another half century. I look forward in working with Ben over the next year to make this all happen!”

Everett has served as the Foundation Director since October of 2013. She says that she will still fill that position as well with the help of an assistant that will be hired by the Foundation Board. She loves that job and does not want to give it up. In fact, she says that by combining that with the administrator/CEO it will unify all the boards. She is emotionally vested in the facilities and the belief that they are a local facility that serves the communities around them.

Foundation board president Wade Enget says, “The Mountrail Health Foundation Board fully supports the hiring of interim Administrator/CEO Benjamin Bucher of Rolla, and the long-term plan to hire Steph Everett for the position of Administrator/CEO of MCHC.  In the past five years, Ms. Everett, as the Executive Director of the Mountrail County Health Foundation, has shown strong support for providing quality health care for our community and the surrounding area.  Ms. Everett brings the energy, ability and commitment needed to meet the Foundation’s goal:  “Your Health”.”

She and her husband Jim will be building a home in Stanley, something that also shows her commitment to the facility and the community. Her belief structure stresses the importance of the survival of healthcare facilities in Stanley. It is not only the jobs that the facilities provide, but also the access to healthcare with the clinic, emergency room, hospital, swing bed and nursing home.

Access to healthcare is critical to the future of a community. Everett looks forward to being a part of that well into the future.